To share your memory on the wall of Orville Cooper, sign in using one of the following options:

Orville was a 1957 graduate of the Chambersburg Area Senior High School. He retired from Wilson College where he worked as a security guard. Some of Orville’s previous employers were The Department of Revenue, DeRose Industries, F & M Trust, Chambersburg Police Department, Patriot Federal Credit Union, Shively Motors, and A-1 Motors. Orville was a member of the King Street Church for 56 years and a member of the George Washington Lodge #143 and the Tall Cedars of Lebanon. A dedicated grandfather, affectionately known as “Pappy”, he will be remembered as a loyal husband who loved his wife, children and grandchildren.He enjoyed watching The Washington Nationals on TV with his wife. He also enjoyed playing golf in his younger years and watching golf on TV. Orville loved watching his grandkids play sports.

The family will be having a celebration of life at a later date. Arrangements are entrusted to Thomas L. Geisel Funeral Home and Cremation Center, Chambersburg, PA.

Condolences and memories may be shared on his Book of Memories page at geiselfuneralhome.com.
Read Less

To send flowers to the family or plant a tree in memory of Orville G. Cooper Jr., please visit our Heartfelt Sympathies Store.

Receive notifications about information and event scheduling for Orville

There are no events scheduled. You can still show your support by sending flowers directly to the family, or planting a memorial tree in memory of Orville G. Cooper Jr..
Visit the Heartfelt Sympathies Store

We encourage you to share your most beloved memories of Orville here, so that the family and other loved ones can always see it. You can upload cherished photographs, or share your favorite stories, and can even comment on those shared by others.

Flowers were purchased and a memorial tree planted for the family of Orville Cooper. Send Flowers 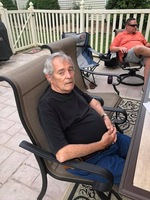